Dementia exacts a heavy toll. Caregivers provide an estimated $18.5 billion in unpaid dementia care each year. Dementia annually drains $290 billion from the economy. The reach of this disease extends far beyond those afflicted. Yet too often, those most affected by dementia—people with the disease—are left out of the conversation. At Arbor, we believe that dementia is a challenge, but not a burden. Life with dementia can still be full of joy and passion. Achieving this goal requires listening to people with dementia instead of assuming we know what’s best for them.

In April, Arbor Terrace Morris Plains hosted an event called Hear Our Voices. Co Hosted by Arbor Terrace Mountainside, Arbor Terrace Teaneck, and Arbor Terrace Roseland, this event aimed to highlight the voices of people living with dementia. We’re proud of our work to demystify and destigmatize dementia, and even prouder of our residents who continue living meaningful lives in the face of the uncertainty dementia inspires.

The Dementia Action Alliance is a nonprofit national advocacy and education organization that includes caregivers, people living with dementia, advocates, researchers, thought leaders, and other stakeholders who are committed to improving life with dementia. The goal is to focus on the whole person, not just dementia symptoms, and to promote inclusion, empathy, and a better life, whether the person lives at home or in a senior community.

Jackie Pinkowitz moderated and spoke at the dinnertime event. Jackie is Board Chair of Dementia Action Alliance (DAA) and past Chair of CCAL—Advancing Person-Centered Living. A well-respected national advocate for person-centered dementia care, she has co-led national Thought Leader Summits and co-developed DAA’s first North American “Re-Imagine Life with Dementia” Conference in June 2017. She holds a master’s in education with a certification in special needs populations, and serves on the Advisory Council for Rutgers University School of Social Work. 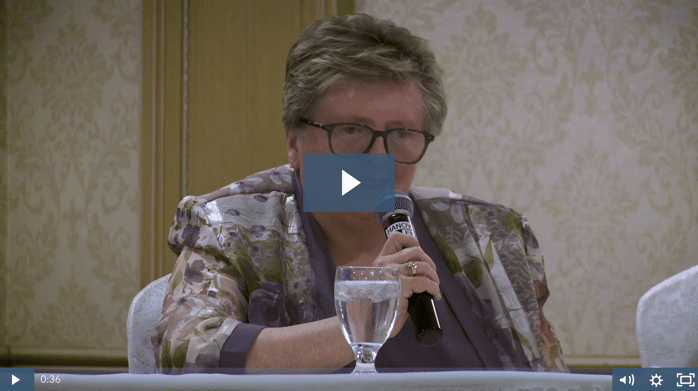 There’s no denying that dementia is challenging. However, it does not have to be depressing, as evidenced by the great time all attendees had at the Hear Our Voices event. As evidenced by the suggestions shared by our panel on how to approach each day with a positive approach.

People living with dementia have the same needs as before: love, compassion, a sense of purpose, something to do, and something to look forward to. Exceptional dementia care is about meeting these needs in a safe environment that anticipates and addresses the continued challenges of life with dementia. Doing so requires listening to people with dementia about what matters most.

At Arbor, we listen to people living with dementia, then work with them to devise novel solutions that keep them safe and help them thrive. We also partner with caregivers to alleviate the stress of caregiving and re-enable a joyful, balanced relationship with their loved ones.

To hear more from people living with dementia or to join the fight for better understanding of dementia living, visit Dementia Action Alliance.

About the Author: Mary Beth Kane

Mary Beth began her career as a therapeutic recreation specialist developing award winning activity-based programs for people living with dementia and their care partners. Since 2004, she has worked in assisted living communities where she strengthened ties within the professional community and helped families find the right senior living communities for their loved one. Mary Beth has been a care partner for both her parents and brings the joys and challenges of these years to her work on a daily basis.

If senior living has ever crossed your mind, you owe it to yourself to learn more about Arbor Terrace Morris Plains. Contact us today to learn about our personalized services.