Every chapter of life presents unique challenges. The senior years are no different. A lifetime of experience has made you wiser and smarter than ever before. Your interests may have expanded into new pursuits, and you may find that family matters more than ever. Mobility concerns and safety issues can also spring up with age, making it more difficult to enjoy your retirement. These helpful services for seniors in Fort Myers, Florida, can help bridge the gap between what you want to do and what you can do.

Tom Winspear is a big believer in the idea that if you’re going to do a job, you need to put your all into it.

Winspear, who works in maintenance at Barrington Terrace of Fort Myers, is responsible for applying disinfectant around the community, and his dedication to the task has earned him the title of “Ghostbuster.”

Although he has never seen the 1984 film about a team of specter hunters who use a backpack and spray wand to vaporize ghosts, when he’s all suited up and wielding his electrostatic sprayer, Winspear could easily fit in with Bill Murray and the gang.

With enhanced sanitation and safety protocols in place to combat the COVID-19 virus, Winspear has a very important job at Barrington Terrace, and his commitment garnered him the Employee of the Month recognition.

“The biggest thing is, it was something that needed to be done, and it fell into the hands of maintenance,” Winspear said.

Once he learned the particulars of how to work the special electrostatic sprayer, a device designed to make disinfecting solutions adhere more evenly to surfaces, he took the job to heart. 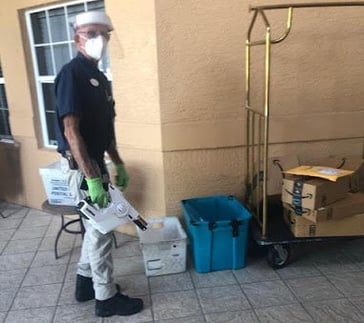 Winspear soon created a schedule for his COVID-busting. He sprays the hallways first thing every morning, then the other common areas. Each week, he gives a different hallway a little extra attention.

For a while, he was coming in seven days a week to keep the community disinfected, but he’s begun delegating the task to other staff members on the weekends.

Winspear’s other responsibilities include changing light bulbs, fixing sinks and occasionally filling in as bus driver. His enthusiastic embrace of this new task isn’t a surprise to the people he works with.

“Tom is a team player,” says senior care counselor Mindy Owens. “There isn’t anything you can’t ask him to do that he doesn’t just jump right in and help. He is such a great addition to our team!”