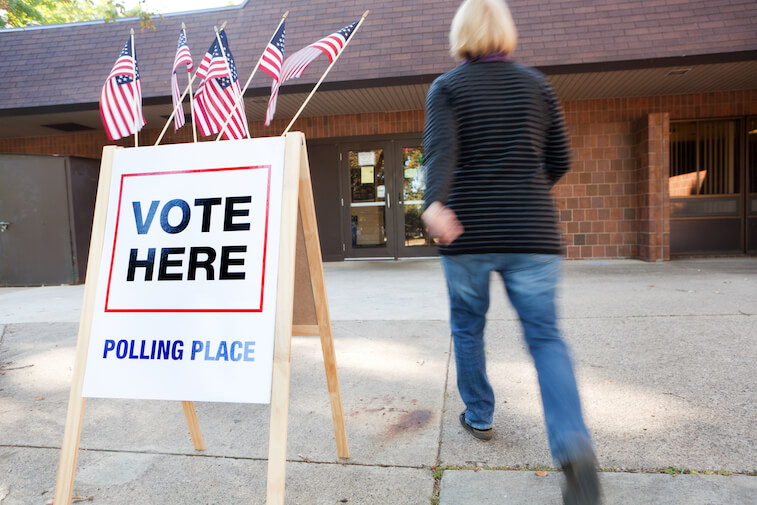 Here’s one political statement we can all agree on: every U.S. citizen should exercise his or her right to vote on November 8.

But does that include people living with Alzheimer’s or dementia? Legally, the answer is yes.

A diagnosis of dementia alone does not legally preclude someone from voting.

As Jennifer Mathis, a Washington lawyer at the Judge David L. Bazelon Center for Mental Health Law, a disability rights group, told the Wall Street Journal: "Our voting system does not require intelligent voting or informed voting. The Supreme Court has said the idea of informed voting is too susceptible to abuse.”

However, in some states, a person who has been legally declared incompetent or incapacitated may be barred from voting. Laws vary from state to state; the Bazelon Center publishes this list of related state laws.

If your loved one would like to vote, there’s still time to register and to obtain an absentee ballot in most states. (Scroll down to see a list of deadlines for all states.) Contact your local election commission if you have any questions about his or her eligibility,

Questions about the voting rights of people with dementia are likely to grow in significance as the population ages and more and more people are living with dementia. But the decision is not just a legal one; it’s also an ethical one. Ultimately, it’s up to the caregiver or a family member to determine whether a person can formulate a voting decision.

In 2003, a group of geriatricians, gerontologists, Alzheimer’s researchers, Constitutional scholars, and philosophers gathered together to explore questions related to dementia and voting. The group concluded that no valid test exists to determine when a person reaches the point of incapacity to vote. However, the group posed two conditions that should be present for a person to vote: 1) the voter understands what he or she is doing, such as choosing between candidates, and 2) the voter understands that the person who wins received the most votes and takes office.

The Alzheimer’s Association also suggests considering these factors: Was the person politically active in the past? Was voting important to the person? Can the person explain his or her opinion in a way that exhibits an understanding and comprehension of the question and decision? Has the person expressed a desire to vote?

If your loved one has dementia and expresses a desire to vote, Arbor Company executive vice president Mary Campbell Jenkins encourages family members to start a dialogue.

“If your parent has dementia, and wants to vote, start a conversation and listen to what he or she has to say,” she said. “Generally people who have dementia but are aware of the upcoming election are still connected in a meaningful way to the world around them. They may simply know that they have always voted a straight party ticket and want to do that again. Voting is a really important way for many seniors to make meaning in their lives.”

For many seniors, including those without cognitive impairment, a mail-in absentee ballot is a good option. If mobility is an issue, a mail-in ballot avoids a trip to the polls. For those who have impaired hearing or vision, or who might have difficulty reading a ballot, a mail-in ballot allows time to enlist assistance to ensure the ballot is correctly understood and completed.

Another consideration: at many polling places, voting is now done electronically.

“That’s another hurdle,” said Jenkins. “For some seniors, that is going to be different than what they’ve done in the past, and may be confusing or difficult to navigate.”

If you’re assisting a loved one with dementia with completing a mail-in ballot, the Alzheimer’s Association suggests asking the person one or two questions at a time, so as not to overwhelm. Explain questions and ask the for the person’s decision multiple times to see if you get the same answer. Even though the person may not recall being asked before, he or she is likely to answer the same way if there’s a clear preference. Be supportive but avoid helping out too much with filling out the ballot.

Finally, know that the staff at your Arbor community stands willing to help, because voting is not only important for our democracy, it’s part of maintaining quality of life for residents. During election season, all Arbor communities offer transportation to help those residents who want to vote to get to the polls.

“Our residents are part of a generation of people who have voted their entire lives, and it’s important to them,” said Jenkins.

Only state without voter registration

"This Is Us" Gets Dementia Right, and What We Can Learn

How Do I Get Power of Attorney for a Parent with Dementia?