Judy hammers away at the dulcimer

Judy was in her late 60s when she discovered the hammered dulcimer.

She fell in love with the sound – “it spoke to me,” she says – and she began taking lessons. Now 83 and a resident of Arbor Terrace Citrus Park (Tampa, Fla.), Judy has made the hammered dulcimer a cornerstone of her life, playing solo and with the Hammerhead Dulcimer Society of Tampa.

Because of the pandemic, however, the Hammerhead Dulcimer Society of Tampa – or the Sharkies, as they call themselves – had to call a halt to live performances. Passionate about the instrument though, Judy practices every day. Her favorite songs to play include “Amazing Grace” and the Beatles’ “When I’m Sixty Four.” 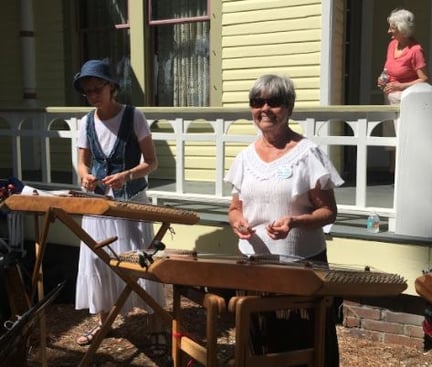 According to researchers at Johns Hopkins University, music is a great way to keep the brain healthy and strong as we age. Listening to or playing music can provide a unique kind of brain stimulus, reduce anxiety and lift the mood.

After 15 years, Judy says she’s still learning the dulcimer, and she agrees that music is a key to keeping the mind sharp.

“It keeps your brain working, that’s for sure,” she said, “and just the discipline of practice and being active.”

Not too far from Judy at The Preserve at Palm-Aire in Pompano Beach, Fla., is Robert, who still has the rock-star mustache and longish hair of his youth, when he played shows all over the country.

Robert learned to play the keyboard as a child, and over the years he added guitar and bass to his repertoire. In his younger years, he performed solo and with a trio.

His musical career included rock and country, and one of his favorite songs to perform is Alan Jackson’s country classic “Don’t Rock the Jukebox.”

A retired University of Miami anthropology professor, Robert keeps a keyboard in his apartment and still plays regularly, occasionally performing for his neighbors in the community.

The piano is the key for Linda

Linda, who lives at Arbor Terrace of Johns Creek (Suwanee, Ga.), loves the self-expression of playing the piano. She began taking piano lessons at age 9, and she grew up singing in church and high school.

Linda especially enjoys playing Christmas songs and hymns such as “How Great Thou Art” and “Great is Thy Faithfulness,” and she likes to add a few improvisational flourishes as she plays.

“When I sit down at the piano, I just add in notes here and add in chords and things like that,” she said.

Rita has a song in her heart

Rita, a resident of Arbor Terrace Mountainside (Mountainside, N.J.), fell in love with music as a child. Although she never sang professionally, Rita can often be heard around the community belting out Ella Fitzgerald tunes.

“I just enjoy singing,” she said. “It’s just normal to me to sing all the time.”