Mr. Johnson finally gets to see the Falcons

We teamed up with Verizon Wireless, the Atlanta Falcons and international nonprofit Second Wind Dreams yesterday to help Mr. Edward Johnson, 98, realize a lifelong dream of watching an Atlanta Falcons football game in person. Johnson, a Tuskegee Airman veteran, was honored in front of the Georgia Dome’s crowd during Sunday’s game against the Cleveland Browns as part of the football organization’s military appreciation efforts. 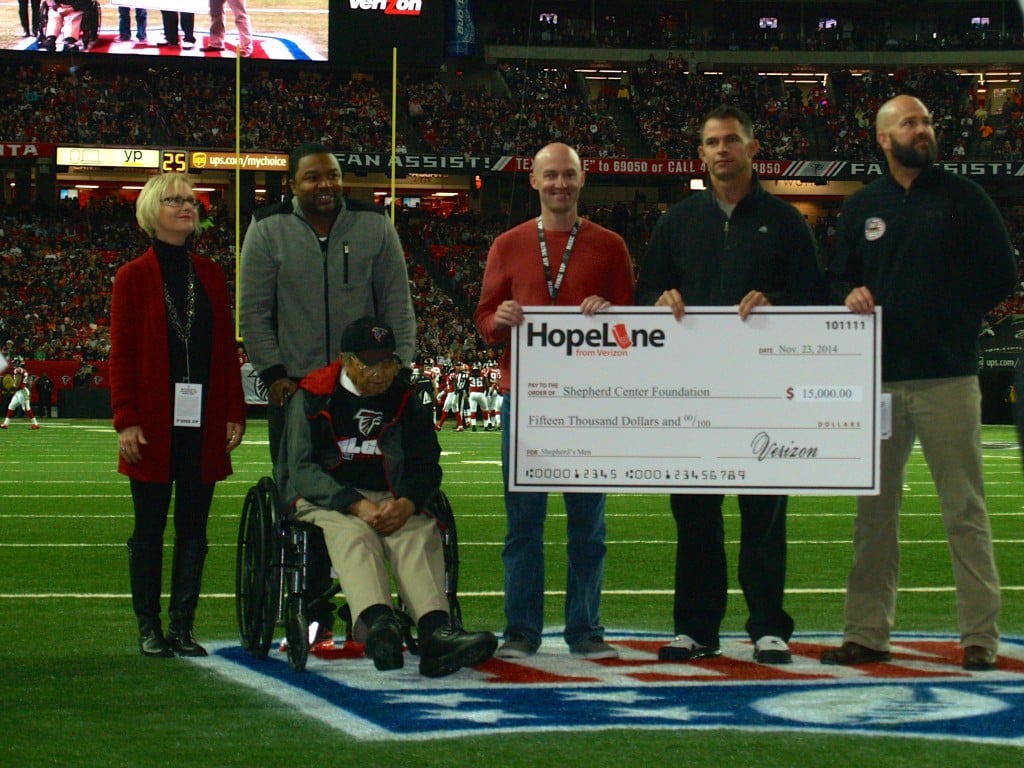 Johnson is a retired member of the Tuskegee Airmen who served in World War II and trained pilots how to fly using instrumentation. After the war, Johnson became the first African American master electrician in Atlanta. In 1947 he started his own business, Johnson and Wood Electric Company, in partnership with a fellow Tuskegee graduate, which served as a training ground for young black electricians. Upon retirement he continued working on projects including the wiring of the MARTA train stations and at the Clark Atlanta University power plant. Today he resides at Arbor Terrace at Cascade. Managed by The Arbor Company, the residence is a premier assisted living and memory care community dedicated to engaging and enriching the health and spirit of its residents.

Additionally, Verizon Wireless presented a $15,000 HopeLine donation to Shepherd’s Men in his honor. The grant will support the Shepherd’s Center Foundation’s military initiatives, helping veterans affected by Traumatic Brain Injury and Post Traumatic Stress Disorder. Since the launch of the HopeLine phone recycling program in 2001, HopeLine from Verizon has collected more than 10.8 million phones, given out more than $21.4 million in cash grants, and distributed more than 180,000 phones for use by domestic violence survivors.

“We are thrilled to be able to be a part of Mr. Johnson’s dream fulfillment and to support the efforts of the Shepherd’s Men to help Georgia’s families affected by military trauma. We have a long standing commitment to helping our country’s veterans and their service will never be forgotten. A big thanks to our partners in this effort, the Atlanta Falcons, for helping us make this happen,” said Jonathan LeCompte, president – Georgia/Alabama Region, Verizon Wireless.