This Halloween turned out to be spooktacular fun for residents of The Arbor Company communities, as residents and staff participated in scavenger hunts, costume contests and more.

Arbor Terrace of Mountainside (Mountainside, N.J.) served up a funhouse-style Halloween meal for residents. Staff members dressed in costume, and the dining room was decked out in autumn décor, with everything from spiderwebs to scarecrows. Residents were invited to dress up as well, and they also received treats. The community invited the daycare center next door to bring their students for a Halloween parade near the front entrance so that residents could see the children walk by in costume.

Arbor Terrace Fairfax (Chantilly, Va.) sent residents on a Halloween scavenger hunt in their neighborhoods, and the residents received goodie bags. In addition, residents made “slime” and enjoyed cookies and punch.

At Arbor Terrace Senior Living (Lanham, Md.), there was a “socially distant trunk or treat” event. The community invited the children of Kiddie Academy Daycare to visit the community, where staff members handed out candy from a trunk in front of the building. Inside the community, residents and staff dressed up in costume for a socially distant Hallway Fashion Show, followed by Halloween treats. 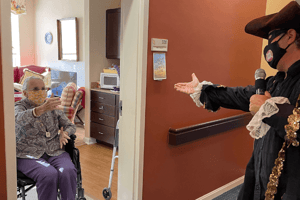 Arbor Terrace Naperville (Naperville, Ill.) had an indoor staff parade in which staff members donned costumes and decorated a snack cart that stopped by each resident’s door. Residents also participated in Halloween-themed activities.

Summit of Uptown (Park Ridge, Ill.) celebrated Halloween with a costume contest for the staff and a door decorating contest. Residents were invited to dress up as well. The Engagement team also dressed in costume and went door to door handing out candy to the residents. 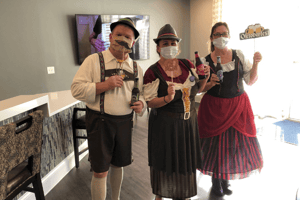 Residents of Arbor Terrace Crabapple (Alpharetta, Ga.) put their own creative stamp on pumpkins. Instead of slicing faces into the orange fruits to make jack-o'-lanterns, they used nail polish and water to create marbled designs on the pumpkins. The final result was a selection of beautifully colored and artistic pumpkins.

Donna Isbell Walker
Donna is a former newspaper feature writer and editor whose passion is writing about WWII and Korean War veterans.